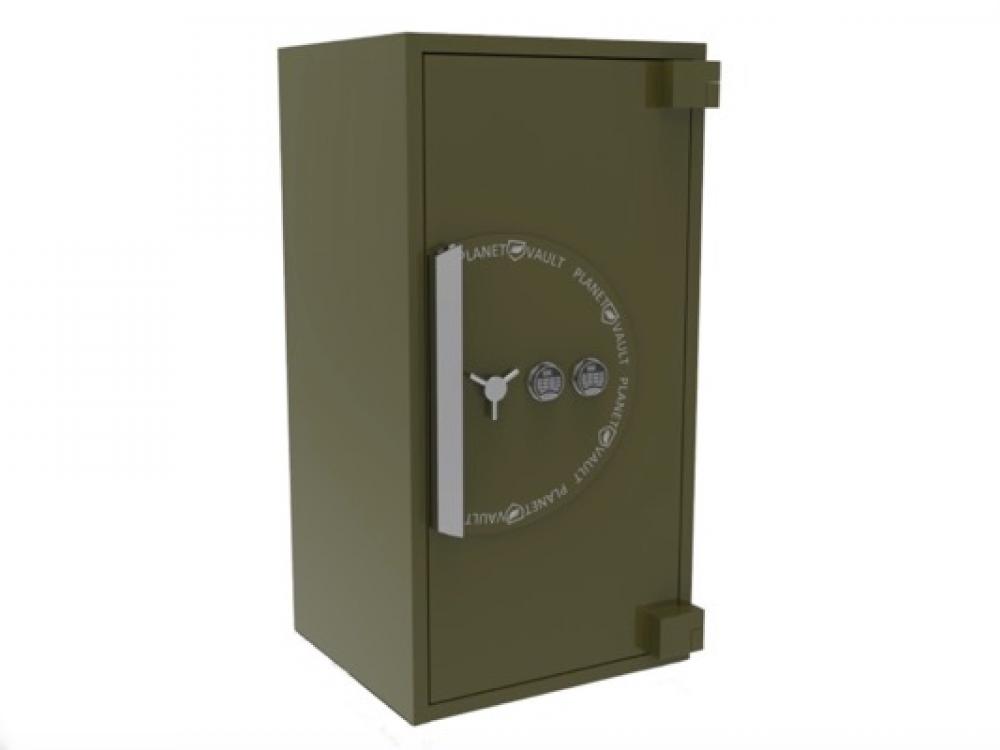 Rolland sells an eco-friendly line of safes made from recycled material. Photo courtesy of Rolland.

A Dallas company is blowing up long-held notions about safes.

Rolland, a 100-year-old family-owned business, has come out with an eco-friendly line of security products made from recycled materials.

Rick Rolland is the third generation owner who is hoping to revolutionize the market with the Planet Vault.

His grandfather opened the company’s first storefront in New Orleans in 1918.

Rolland, who moved the company’s headquarters to Dallas in 1990, said there hasn’t been much innovation in the American safe industry over the last 70 years. Since 1947, safes have primarily been made out of steel and concrete. Before that, they were made from steel plates.

Two years ago his manufacturing partner in Ecuador came up with a novel design that he hopes will appeal to a new generation of environmentally savvy clients.

The vault is made from a proprietary mixture of recycled plastic, ceramics and steel.

According to the brochure for the Planet Vault, 97 percent of its materials are derived from recycled sources.

Miguel Alarcon, is the designer at Surimax, a family-owned safe manufacturer in Ecuador, who invented the product two years ago.

“I wanted to create something new, something never seen before,” he told GreenSourceDFW by phone.

One of the issues safe manufacturers grapple with is the weight of the product. Safes can weigh as much as two tons and are costly to ship.

As recycling has grown common worldwide, Alarcon saw the abundance of lightweight plastic as the answer.

Rolland said some British researchers attempted to make a safe out of virgin plastic back in the 1990s, but failed.

“Back then, they didn’t have access to the recycled plastics the way we do today,” said Rolland.

Alarcon still had to figure out how to make the safes as impenetrable as traditional ones made from concrete and steel.

He came up with a formula that proved to be the key to its strength. He incorporated the denser plastic derived from old bottle caps with bits of ceramics to create a more resistant barrier.

“You hit one of these with a saw and the ceramic pieces will damage the tool,” said Rolland.

Rolland said that a smart burglar can get into any safe eventually with the right tools.

“When somebody attacks a safe, all we’re trying to do is buy time,” said Rolland. "We want to slow them down or frustrate them."

Because the plastic is flexible, it absorbs energy from hammers and chisels and can gum up power tools.

The safes are also made to be bolted down for additional security if needed.

The real test came when they submitted the Planet Vault for the prestigious UL certification and passed. The UL rating shows the safe has under gone rigorous independent testing for strength and fire resistance.

With its UL seal of approval, Rolland has sold the Planet Vault to traditional customers in the banking, jeweling and lending industry. The eco-friendly safes have also garnered interest from the burgeoning cannabis industry, where clients tend to be more environmentally aware. In addition to weighing about half as much, the Planet Vault safes retain less moisture than the concrete versions, which is better for storing organic products.

“Eventually we want to branch out to make all of our safes in this material,” said Kim Montini, director of communications and marketing for Rolland. “It’s lighter, which decreases the cost of shipping and its carbon footprint, and it looks pretty too.”

A marketing brochure for the Planet Vault touts its alignment with a more environmentally friendly world.

“If we never have to use concrete again that would be a great day,” said Rolland. “Concrete has a tremendous carbon footprint. It uses a lot of energy to be created, material has to be mined. Anytime we can get away from using it it’s a good thing.”