Dallas and Fort Worth bishops praise Pope’s message on environment

Last week, Pope Francis delivered a blunt message to the world regarding the environment in a 184-page encyclical, entitled "Laudato Si," an Italian phrase meaning "Praised Be To You" taken from a song penned by St. Francis, the patron saint of ecology.

In the manifesto, the Pope did not mince words in describing humanity’s “reckless” behavior with regard to nature, laying blame on big business for creating a culture of “extreme consumerism” without regard for environmental degradation. 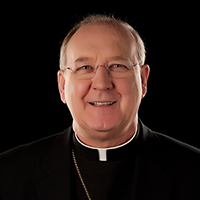 In an online statement, Bishop Farrell commends the Pope and hopes that those who read or hear the encyclical will accept it as a call to conversion and action. He reiterates the Pope saying:

“Creation is not a property, which we can rule over at will or even less, is it the property of only a few.  Creation is a gift. It is a wonderful gift that God has given us that we can take care of and use for the benefit of all, always with great respect and gratitude.”

Above, Bishop Farrell. Courtesy of the Roman Catholic Diocese of Dallas.

Bishop Olson of Fort Worth lauds the Pope for the encyclical, saying that he challenges us. 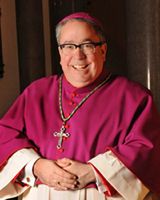 “In his encyclical, Pope Francis definitely conveyed that he is a man committed to solidarity as a virtue, and he believes that the environment is a most basic way in which we can work together,” says Olson. “We are created by God, as is the environment, and while human beings connect and prevail, we are required to be good stewards and treat the environment with respect for human beings’ sake.”

Bishop Olson said the Pope is calling everybody to sensitive dialogues and how we can best serve each other in the environment.

“I think he also highlights very clearly that greed is a sin and integral. Sin is more than breaking rules – it is when we turn our backs on God’s invitation to relationships of love with God and our neighbor.”

Bishop Farrell points out that ecology issues are both immediate and long term. The quality of life of millions of people is being diminished as the result of the present state of the world’s ecology. Future generations will suffer even more if the situation is not addressed promptly.

“It is the obligation of the church to speak prophetically to the halls of power when it perceives an imminent threat to ecology and its impact on countless numbers of people. That is the purpose the Pope’s encyclical,” he says.

When asked what impact the Pope’s views on the environment will have on the Catholic community, Bishop Olson responded that perhaps it will be more sensitive to social consequences compared as to how we did things previously.

“It would behoove us to ask ‘Are we grateful for the enjoyment of nature’s world?’  When we become the creator, we forget to be grateful. I hope it calls on citizens to be more grateful with the environment,” he says.

“Further, love for the environment is one of the last pieces of common ground that will open up to the right to life. What actually is our mission? What is the nature of men and women? What is our responsibility to the poor? When the environment is damaged, it affects the poor.”

Pope Benedict said a lot about the environment, but Bishop Olson thinks that Pope Francis is saying it in a new way, which he hopes will have great bearing not only on people in North Texas, but all over the world.

“It is my request that they are more inclined to take the issue to prayer and ask for His guidance. If that happens, change will take place among human beings.”

Excerpts from his June 18 Encyclical on the Environment :

"The Earth, our home, is beginning to look more and more like an immense pile of filth. In many parts of the planet, the elderly lament that once beautiful landscapes are now covered with rubbish."

"We need to reject a magical conception of the market, which would suggest that problems can be solved simply by an increase in the profits of companies or individuals. Is it realistic to hope that those who are obsessed with maximizing profits will stop to reflect on the environmental damage which they will leave behind for future generations?"

"In recent decades, environmental issues have given rise to considerable public debate and have elicited a variety of committed and generous civic responses. Politics and business have been slow to react in a way commensurate with the urgency of the challenges facing our world."

"We know that technology based on the use of highly polluting fossil fuels -- especially coal, but also oil and, to a lesser degree, gas — needs to be progressively replaced without delay."

"A change in lifestyle could bring healthy pressure to bear on those who wield political, economic and social power. This is what consumer movements accomplish by boycotting certain products. They prove successful in changing the way businesses operate, forcing them to consider their environmental footprint and their patterns of production."

"Purchasing is always a moral and not simply economic act."

"Nobody is suggesting a return to the Stone Age but we do need to slow down and look at reality in a different way."

"Yet all is not lost," Francis said. "Human beings, while capable of the worst, are also capable of rising above themselves, choosing again what is good, and making a new start, despite their mental and social conditioning."