This is second in a series of weekly updates on bills in the Texas Legislature that address environmental issues in the final weeks of the session. 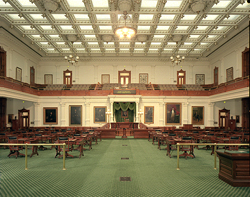 With the 84th Regular Session of the Texas Legislature closing June 1, bill consideration is racing to a narrowing window.  This session has seen an unprecedented flood of environmentally adverse bills.

The Senate floor. Courtesy of the state of Texas.

A real doozy that both duplicates existing law and attacks citizens'  constitutional rights to petition their local government comes up in Senate committee Tuesday, and, say observers, will likely come to a final floor vote within days.

If that double whammy riles up readers, a five-minute phone call to elected representatives and/or  committee members could make a difference.  Links to those appear below.

Here are the details:

HB 2595 (Keffer) would restrict cities from accepting voter-initiated referenda or ballot initiatives, if the economic value of property would be affected.

And, to duplicate a protection already in place, Rep. Keffer’s bill would use the ham-handed mechanism of restricting local voter initiatives.

Voter initiatives can address a broad range of issues. In the environment, restrictions of the right to initiatives could impede citizens requesting zoning regulations for landfills, or ordinances to guide riverfront development or tree conservation.

"Texans all over the state petition their cities for initiatives," says Tom "Smitty" Smith, Texas director of citizen advocacy group Public Citizen. "Initiative and referendum have been used by citizens statewide for 140 years to make changes when city councils don’t.”

These rights are part of the Texas Constitution.

HB 2595, having been already approved out of the House, has only a Senate committee hearing to go, at 9 a.m. Tuesday, before it could be voted on the Senate floor. That could send it to the governor’s desk.

Then, watch out when you want to petition for an ordinance to, say, improve the city’s current mitigation requirements that allow developers to cut large trees and replace them with 5-gallon ones. Your initiative may be missing. 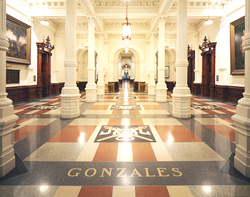 Above, Inside the State Capitol. Courtesy of the state of Texas.