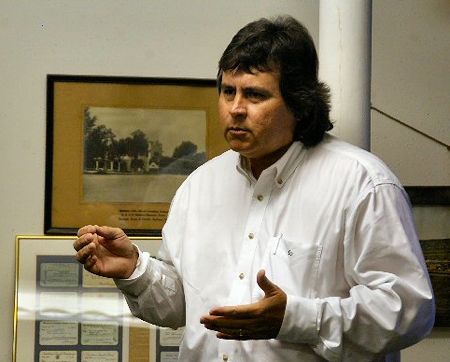 Attendees of the Texas Historic Tree Coalition’s gathering on Wednesday will hear stories passed down from Comanche chief Quanah Parker when Lance Tahmahkera, great-great grandson of Parker, speaks June 17, at 7 p.m. at the Center for Community Cooperation, 2900 Live Oak St. in Dallas.

“I will give a basic history of our tribe and share information that is not found in books,” said Tahmahkera, a Fort Worth native. 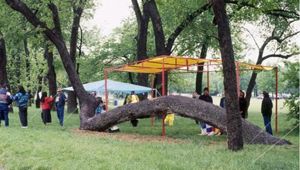 According to Mary Graves, president of the Texas Historic Tree Coalition, the nonprofit works for the Comanches to help find and research potential Indian marker trees – trees bent as saplings by American Indians to mark trails, campsites, low-water crossings, springs and other significant natural features.

Right, An Indian marker tree that once grew in Dallas' Gateway Park. Courtesy of THTC.

"When we're out working, we spend much of the time thinking about their people – how they lived together with nature, what it must have been like," said Graves. "The more we learn, the more we love the Comanches and their relationship with the land. We jumped at the opportunity to have Lance talk to us and teach us. Everyone's looking forward to it."

Tahmahkera will speak about Parker and the tribe’s overall transition from life on the plains to the reservation to the modern way of life.

“I'll share children's stories as well,” he says. “I'll also bring various things such as regalia, buckskin dress, bow/arrows and old photos that we can pass around and talk about. I have a couple of tidbits on trees that are not commonly known, but for nature, will speak about the near extinction of the buffalo and its impact on our tribe.”

But when he was growing up, Tahmahkera was able to stay close to the Comanche traditions, and much of his youth was spent learning the stories about ancestors and tribal ways.

“I'd have to say I was given a unique opportunity of having a famous ancestor and was able to learn things and family stories about Quanah that most people are unaware of,” he said.  “My father Monroe's first words as a child were in Comanche, and English became a second language learned when he attended the Fort Sill Indian School. Dad was raised in the Comanche traditions and shared them with my sister Karen and brother Steve.”

Tahmahkera’s parents moved to Fort Worth around 1951, but on weekends the family often returned to Oklahoma to visit family and attend pow-wows. 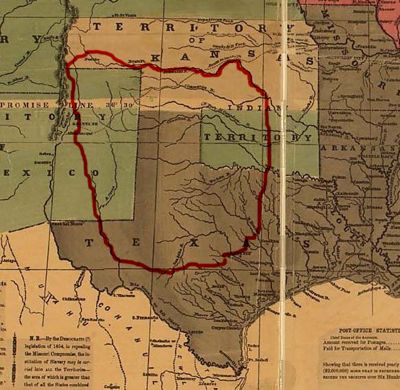 “Pow-wows were a way to stay connected to our traditions and see family and friends,” he says. “As for being a descendant of Quanah Parker, there is a great interest in him and his mother, Cynthia Ann. We've been given no telling how many opportunities to attend various events honoring him and his legend. Dad was passionate about keeping our traditions alive and I give talks to various groups in an effort to continue his efforts.”

Above, Map showing approximately the area, known as Comancheria, occupied by the various Comanche tribes prior to 1850. It's made using "Reynolds's Political Map of the United States" (1856) from Library of Congress collection (public domain).

Tahmahkera says he was also treated differently when growing up because of his Comanche lineage as well.

“Growing up, people from all over have sought us out to learn more details about Quanah, Cynthia Ann and the Comanche people. In the late 60s, a gentleman and his wife from Germany came to our house to learn more on Quanah as he was writing a book. Things like that were a common occurrence.”

However, Tahmahkera says much of what he knows about Quanah Parker comes from stories told to him by relatives.

“Things you'll not read in a book,” he explains. “Listening to stories told to me, there seems to be little importance placed on what is written in books. I still make a point to travel to Oklahoma and visit my father's Aunt Anna Tahmahkera. She is 97 and sharp as a tack. Her mother passed when she was a small child and she was raised by Topay, one of Quanah's wives. I sit with her and listen to the first hand stories of events that happened back then.”

Besides his Aunt Anna, he also visits with other elders such as his Uncle Garrison and Jack Davis, a relative and friend, discussing with these elders the importance of keeping the Comanche ways of life alive.

“They are more than willing to share their knowledge,” he explains. “My father's and my generations were on that dividing line that signified the end of the Americanization process that all tribes have gone through. For us, it was the transition from life on the Great Plains to our modern life styles we have now. Dad's first words were in Comanche. Mine were in English. He attended Indian Boarding School, I attended public school. But, Mom and Dad made sure those Indian traditions were not lost and shared them with us kids constantly.”

Overall, Tahmahkera says that his parents always had a deep respect for nature and instilled the same to their children

“My brother and I are Eagle Scouts, which is synonymous with respecting and safe guarding nature,” he said.,

He shares a story he was told by his father's Uncle Benjamin Tahmahkera about how the Buffalo got the hump on his back.

“He put me on his knee and told me the story and this story, like so many others, have morals to them and are used to teach the young how to live their lives. Uncle Ben only spoke Comanche and the only times I heard him speak English was when he was telling me these stories, I will also share these stories with the group [this week too].”

For more info, see Texas Historic Tree Coalition website. Seating for the event is limited, so contact Mary Graves at Mary.Graves@txhtc.org to researve a seat.