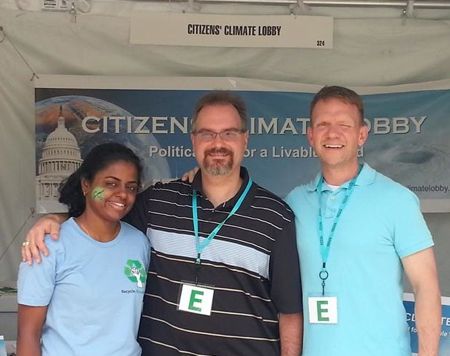 Above, Swetha Kannan and Shawn Reeder will head up the Dallas and Fort Worth groups, while Ricky Bradley, right, serves as Third Coast Regional Coordinator. A Denton chapter launched earlier this month.

Enable citizens to experience the power of directly lobbying their representatives, and being heard. That's Citizens' Climate Lobby's strategy. It must be working. Membership’s growing and the North Texas group has now divided into three chapters:  Dallas, Denton-Lewisville and Fort Worth-Mid-Cities

Bradley started the North Texas group in 2012, after a shock when he returned to a favorite natural area, Montana's Glacier National Park. He found the glaciers melting and shrunken since his last visit. Searching the Web, he found Citizens' Climate Lobby. Another Dallasite, Subin Yoon, joined the same month. They connected and got to work.

"For the first year, it was just me and Subin,” says Bradley.

Now the DFW groups total several hundred supporters and 20 members who actively engage Congress, the media and the public. Dividing into three local chapters makes it easier for members to travel to meetings for face-to-face lobbying practice and planning, Bradley explains. As well as lobbying, members may write, speak or do lobbying support jobs.

The Denton group launched Jan. 10, with 12 members on board. Denton co-leader Brett Cease comes to the job with experience starting a group in Bemidji, MN, his hometown.

“I had such an empowering experience feeling connected to the legislative process and witnessing legislators and their staff wanting to talk with us, their constituents,” he says.

"With the typical nonprofit, you give money, and the staff lobbies for you. CCL teaches you to lobby yourself…I got involved, and I was empowered and could see all the change that was happening,” Bradley said. “I no longer feel helpless, I feel powerful.”

Citizens' Climate Lobby is the only grassroots organization lobbying at the federal level to get specific legislation passed.

“Now,” says Bradley, "industry socializes the environmental costs of energy production. Oil companies are allowed to pollute at the public's expense. The cleanup [for waste products, air and water pollution, land degradation and climate change] is now handled by federal agencies, such as FEMA, and state and local governments. The taxpayers pay.”

CCL‘s goal for 2015 is a bill to put a price on carbon, by charging petroleum producers for the carbon they market, with proceeds returned to the public. This mechanism is called “carbon fee and dividend.” When the industry marks up product to cover carbon costs, consumers will meet the increased costs from their dividends.

“The point is, pricing fossil fuels at their real cost will provide an economic incentive to invest in and use clean fuels,” said Bradley.

The reception the group receives when they call on congressmen has warmed in the past two years.

“In 2012, we met with a conservative Texas Republican House member, and they kept us out in the hall, not in their office. Going in talking about climate change was a non-starter.”

By focusing on the economic issues of the current system, CCL finds common ground with conservatives.

“We meet people where they are, and find something to appreciate,”  Bradley describes their approach.

Times seem to be changing. At the end of CCL’s 2014 lobbying trip, U.S. Rep. Chris Van Hollen introduced a “cap and dividend” measure.

On Jan. 20, the American Petroleum Institute publicly stated that "American prosperity is threatened by climate change.”

Exxon’s website acknowledges that climate change is caused by humans. CEO Rex Tillerson has stated in industry journals that to address climate change, Exxon want a clear, transparent price on carbon, with all proceeds going to the people.

On June 21-23, CCL holds its annual conference and lobbying trip to Washington,

D.C. A thousand attendees are expected, from the U.S. and abroad.

"Our goal," says Bradley, "is a bipartisan or Republican bill. We will ask them to sponsor a bill that puts a price on carbon and returns funds to the American people. This would add jobs save lives and be an economic boon to the country.”

Will they get a bill introduced?

The Denton group meets the first Saturday of the month. Feb. 7 is the next workshop, from 11 am to 1 pm in UNT's Environmental Education, Science, and Technology, room #176.

CCL hopes to launch the west Metroplex chapter by the end of the year.