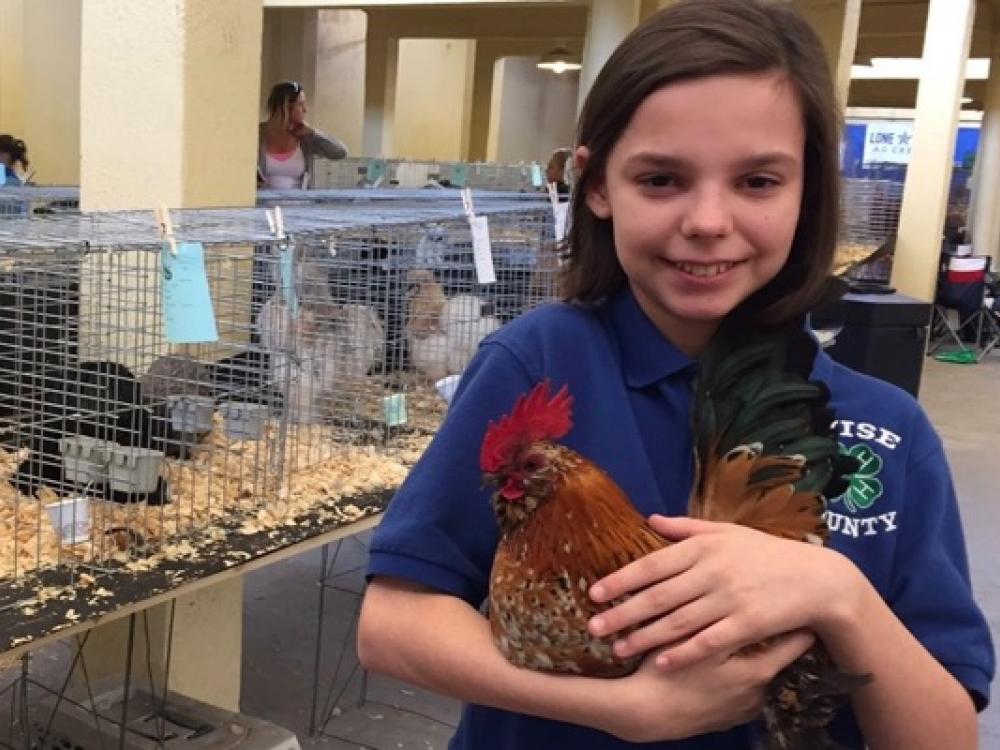 Maranda Haschke of Decatur brought her prize-winning Belgian d'Uccle rooster, Billy, to compete at the North Texas Poultry Showcase at Fair Park in Dallas on April 8​. Photos by Andrea Ridout.

Growing up in suburban DFW, I always envied the ag kids at my school – but I was not one of them. Much as I loved animals and had even planned to be a vet, the “goat ropers” were a different breed. They wore cowboy boots and tight jeans with pearl-buttoned shirts that were a contrast to my city duds and I watched from afar as they raised their goats, sheep, calves and chickens. In the age of disco and Farrah Fawcett hairstyles, they seemed like relics from a bygone era.

Judge Monty Fitzgerald from Decatur is experienced at picking winners. Below, Silky chickens are so odd looking that Marco Polo thought they were a cross between a bird and a rabbit.​ 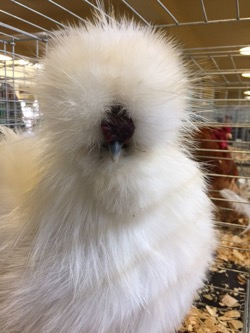 But ag has moved into the mainstream. Kids as young as five years old are joining 4H in droves (though they must be 8 years old to show) and many public and private schools are jumping on the urban homesteading bandwagon. Even I finally have my own pet rooster, George, and I took him along to The North Texas Poultry Showcase at Fair Park in Dallas on April 8. As we strolled up and down rows of beautiful feathered creatures, it was gratifying to see folks from all walks of life with their birds. 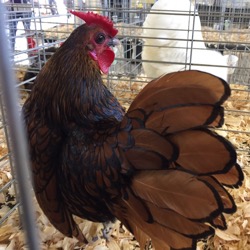 The show was hosted in part by the Dallas County Texas A&M AgriLife Extension Service that helps to promote, in their own words, “community involvement, scientifically-based education, lifelong learning and volunteerism.”All of those initiatives were in play at the affair that was dominated by hundreds of chickens – but also included ducks, geese and even the very odd guinea fowl.

The egg competition was fierce this year. 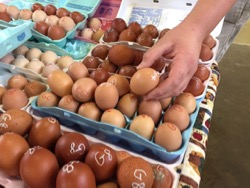 Amidst a cacophony of crowing, squawking and laughter, show organizer Elizabeth “Liz” Rudd, Agriculture and Natural Resources County Agent, was noticeably pleased with the turnout.

“This is close to what we would expect at the State Fair of Texas,” said Rudd. “It’s just an example of how important backyard poultry has become in this area.”

Chicken accessories were available for sale such as this multi-pocketed egg-gathering apron. 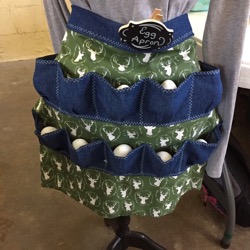 Birds were judged on a variety of traits including breed standards, overall health and temperament. The event also included an egg show and art competition. Categories were open to fowl enthusiasts from all around DFW including quite a few backyard “farmers.”But the real stars were the kids and their chickens, many of whom are family pets.

Ribbons were awarded for Best in Breed and Best in Variety plus many of the youngsters competed in Showmanship, which encourages public speaking and presentation as well as grooming skills. Before the event, most birds received an extensive makeover from their owners including a bath, beak and claw trimming, plus comb and wattle conditioning. Hair spray and petroleum jelly are the insider’s secrets to shiny feathers and are used liberally. 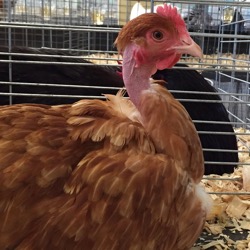 A Transylvanian Naked Neck hen shows off her heat-tolerant features.

Dozens of standard breeds were represented including Rhode Island Reds and Barred Rocks plus George’s cousins - the Buff Orpingtons. More unusual entries included Jersey Giants weighing in at over 10 pounds, heat-tolerant Transylvanian Naked Necks, stunning Golden Seabrights and the show-stopping Silkies, originating in China and so odd that Marco Polo thought they were a cross between a bird and a rabbit.

Maranda Haschke from Decatur brought her prize-winning Belgian d'Uccle rooster, Billy, to compete against other bantam (mini) chickens from across the Metroplex. At home, Billy is just another member of the family. 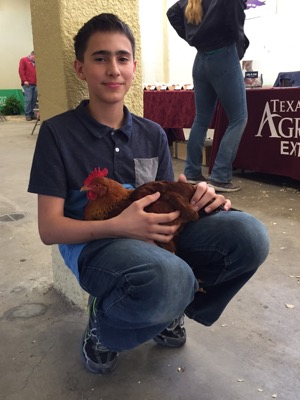 “He often comes in the house,” Maranda admits. “He loves to be cuddled and spoiled.”

Mom, Julie Haschke, is proud of the responsibility that raising chickens has taught her daughter, even when Billy is sometimes a bit overly aggressive.

“She has learned to be tough through Billy’s occasional nips and realizes that it’s just part of owning rooster.” Billy received Reserve of Variety and Reserve of Breed ribbons in addition to Maranda’s fifth place in Intermediate Showmanship. She also took first place in Intermediate Chicken Art and her younger sister, Emma, brought home second place to add to their wall of fame.

Armand Rathgeb entered his New Hampshire Red hen, Skit, into the Senior Showmanship group and took third place honors but he was ambivalent about the awards.

“I especially like it when my birds win, but even when they don't – it's a lot of fun,” said Rathgeb. 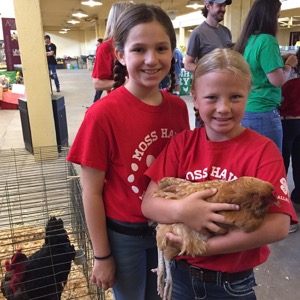 Skit was never out of sight and was mostly on Armand’s lap except during the judging process. His father supports his son’s efforts as part of the Legacy 4-H Club in Colin County and knows that it will help with Armand’s eventual plans to study veterinary medicine.

Siblings, Scout and Harper Gomez, each brought a hen to the competition and were thrilled with first place ribbons for their birds and Harper’s coveted blue ribbon in the egg show. More important than winning though was the camaraderie that the experience fosters.

Their school, Moss Haven Elementary in Lake Highlands, is one of the most active in the area for backyard poultry.

“We have 30 kids in the 4-H Club and about 10-15 that show chickens,” the girls’ mother, Ashley Gomez, notes. “It gives kids a place and a bond with not only their specific chicken but also with each other.” 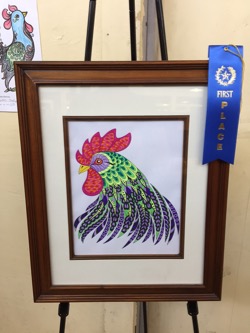 Like many schools, Moss Haven also hatches chicks in the classroom. They host their own annual event – the ever-popular A Peep at the Coops backyard chicken coop tour, this year on May 7, with proceeds supporting 4-H and the school’s extensive garden, Moss Haven Farm.

So hopefully it’s not too late for me – and I think that I will enter George into some upcoming competitions this year. Maybe I’ll run into some of my old goat-roper friends but this time I’ll be wearing cowboy boots myself.