The Chevrolet Volt - The Successor to EV-1 Electric Car

In the perfect world of thinking green the car you drive can add up to a lot when considering Mother Earth.

A good case in the point is the Chevrolet Volt, which I recently drove and I was actually quite pleased too.  Not only is it all about fuel efficiency to the tune of about 379 miles on a full battery charge and a tank of gas, but I was also noticed just about everywhere I went with a thumbs up pointed in my direction. 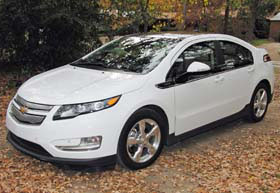 Austin resident, (Austin was one of the Volt test markets by the way) Dave Tuttle has had his Volt since January 2011 and says “I now have 11,409 miles on it (7680 EV miles) and we have taken numerous trips in it typically achieving 35 to 42 miles per gallon on long trips, which has driven down my lifetime miles per gallon to only 105 mpg."  Tuttle says too that he went four months and 3,680 miles over the summer on just one tank of gas. ( photo credit: Russell Dandridge )

“So, while everyone else was having to stand at the gas station once a week in the 100 degree-plus Texas heat for a record number of days,” he adds “we simply pulled into our garage and plugged the Volt into our home charger, which takes 15 seconds to connect.”    Tuttle says he especially likes the home charger because it gives him his own "personal refueling station."    “I find electric vehicle charging to be far more convenient than going to the gas station and more recently I haven't been to the gas station since November.  We will only need to visit a gas station whenever we take our next out-of-town trip sometime in the future,” he explains.

Key components of the Volt include a starting price at $39,495 with a federal tax credit of $7,500 and it’s electric, two wheel and front drive.   Launched in late 2010, the Chevrolet Volt has won more than 30 awards in the United States and other markets so far and achieved a five-star NCAP overall vehicle score for safety by the NHTSA and is a Top Safety Pick by the Insurance Institute for Highway Safety.

The battery itself is a long-life consisting of a 5.5-foot, 435-pound T-shaped, 16-kWh lithium-ion battery pack supplying energy to an advanced 111-kW (149 horsepower) electric drive unit that propels the vehicle.  ( photo: GM )

Okay, so what about the downside of the Volt as in the stories about the battery catching fire?  That’s not too eco-friendly, but GM says there are plenty of initiatives for customer satisfaction and battery safety research is, and has been underway, to ensure ongoing confidence in the Chevrolet Volt extended-range electric vehicle.

In fact, while there have been reports of battery-related fires in Chevy Volts effecting consumers, Mary Barra, senior vice president, Global Product Development, said the GM electrical fires have not occurred on public roads. (althought there have been fires in off road locations, at least one in a consumer's garage - editor) “GM and the agency's focus and research continue to be on the performance, handling, storage and disposal of batteries after a crash or other significant event,” she says.

In fact, GM assurances point toward consumers not needing to be worried about the safety of mass-produced plug-in cars at all.  “The Volt is a five-star safety car.  Even though no customer has experienced in the real world what was identified in this latest testing of post-crash situations, we're taking critical steps to ensure customer satisfaction and safety,” Mark Reuss, president, GM North America said.  “Our customers' peace of mind is too important to us for there to be any concern or any worry. This technology should inspire confidence and pride, not raise any concern or doubt.”

Tuttle, who replaced a BMW 3 series when he made his Volt purchase obviously wasn’t worried about his car’s battery catching fire. He says his primary focus was on more of the green initiatives the car offers.   And the main reasons he bought his Volt he says is because finally plug-in electric vehicles like the Volt are a viable alternative-fuel vehicle, which can substantially reduce dependence on foreign oil, reduce the large trade deficit, reduce emissions, reduce the geopolitical entanglements from "our addiction to oil," while also improving U.S. energy security.

He adds too, in conclusion, “on top off all that, they are very quiet, smooth, and enjoyable to drive.  My Volt is a blast to drive with very strong low-end torque from the 273lb-ft electric motor and is as much fun to drive as the BMW."

Other related Green Source Articles include

Thinking Green Behind the Wheel of a Luxury Car    By Rita Cook October 24, 2011

Rita Cook is an award winning journalist who writes or has written for the Dallas Morning News, Focus Daily News, Waxahachie Daily Light,  Dreamscapes Travel Magazine, Porthole, Core Media, Fort Worth Star Telegram and many other publications in Los Angeles, Dallas and Chicago.  Cook is the Managing Editor of Insider Magazine, worked at the Chicago Sun Times for renowned columnist Irv Kupcinet and can also be heard Sunday morning in Los Angeles on The Insider Magazine Radio Show’s featured segment “I’m Standing Here.”  With five books published, her latest release is “A Brief History of Fort Worth” published by History Press.  You can contact her at rcook13@earthlink.net