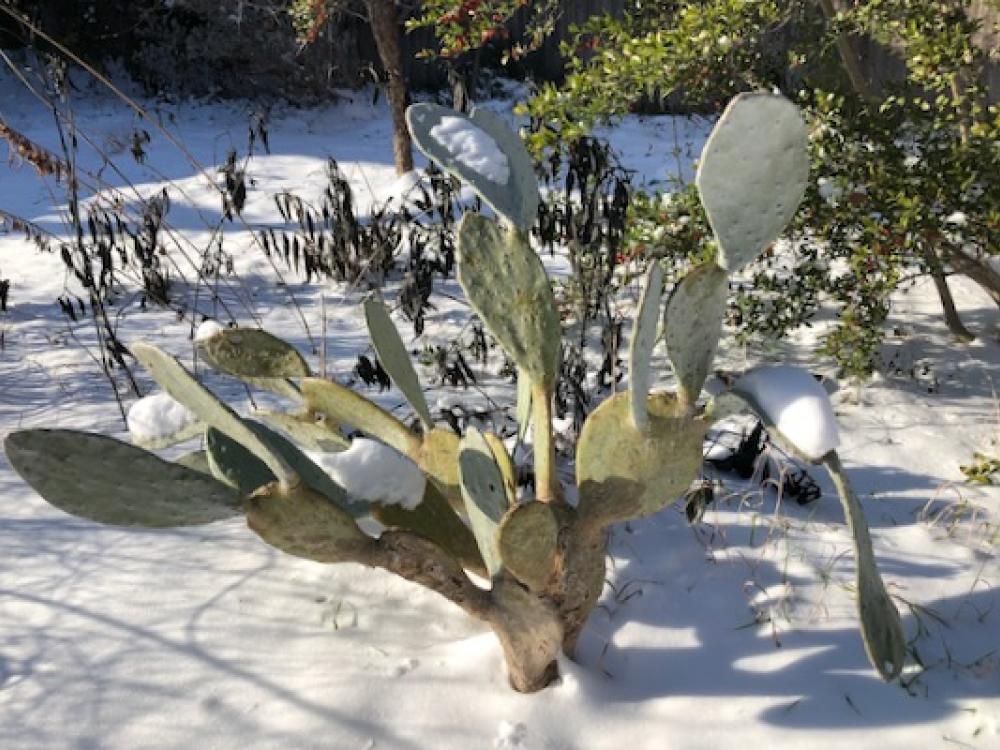 A spineless prickly pear on Feb. 15 in Fort Worth. Photo by Julie Thibodeaux.

A snow-covered Valentine’s Day launched nearly a week when temperatures didn't climb above freezing in the DFW area.

The icy weather’s toll on humans, especially those without power, as well as animals stuck outside was staggering.

Once the weather warmed up, in addition to busted pipes, many North Texans discovered plants withered on the vine.

And many of those cactuses (or cacti) and succulents that greenies cultivated because of their hardiness to heat and drought looked pretty beat.

We asked a local expert about the plucky plants' chances of survival and how to care for them after the thaw. 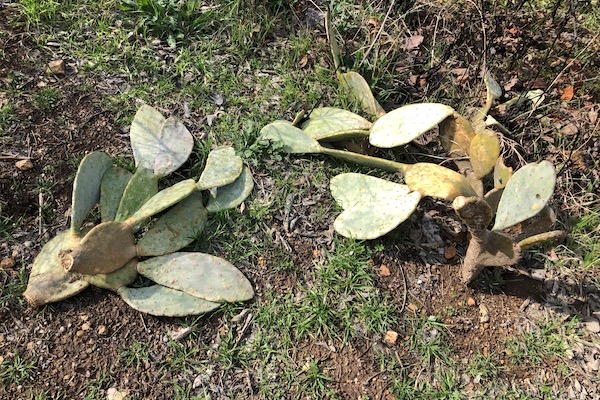 David McClellan, president of the Fort Worth Cactus and Succulent Society, said the spineless prickly pear or the Ellisiana opuntia cactus is a native of northern Mexico, New Mexico and West Texas. It's a very cold hardy plant.

“Getting down to 0°F is not really an issue for an Ellisiana if planted in the ground. Yes, the plant might droop some for a while after the cold temps, or even drop some paddles from joint expansion. Overall, the cactus will recover within a month or so.”

According to McClellan, Ellisiana that have been transplanted into higher humidities (east of Fort Worth and north) will have a more difficult time recovering from cold temps as the higher humidity is not the ideal growing environment for the plants.

If you’ve found some of the plant’s paddles have fallen off, those can be propagated.

Let them “cure” said, McClellan. That means drying out for about three to four weeks.

“Then the paddles can be just laid flat on the soil or medium or they can be stood up. Standing them up right seems to be a people thing. Laying flat on the ground is Mother Nature's way,” he said.

You can also cut the paddles into sections, let them cure and plant them as well.

“If you do the cuttings, just lay the pieces (or whole paddle) on top of the soil or medium. They might curl up, but the roots will grow from the part of the paddle in contact with soil.”

Laying them flat can result in multiple starts, he said. 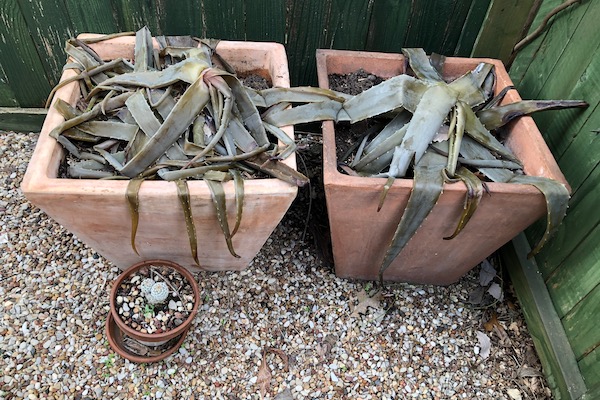 Our aloe vera were double covered during the freeze but could have used more protection. Photo by Julie Thibodeaux.

The news is not so good for aloe vera.

The aloe vera is native to the Arabian Peninsula. It’s a delicate plant that can be killed by a freak freeze, according to SFGate.

McClellan said if your aloe was left outside during the Texas’ epic cold snap, it may be time to go plant shopping.

“This plant should be treated as a tropical plant,” he said. “Just like you when you lay on the beach, they like limited direct sun, warm breeze, not blistering hot wind, and plenty of open shade from a nearby overstory tree or plant or structure.”

If your aloe post-freeze is brown, or worse black, it may be gone.

However, if you can still see some green, it may bounce back, according to Succulent Alley, a gardening blog. They advise putting the plant in a bright, warm place without direct sun. Don’t water the plant for a few days or weeks so the damaged leaves can dry up and fall off.

“So, depending on the plant, it might survive, or it could just be a mount of jelly,” he said. “Again, give the roots time to regenerate and grow. I have seen several agaves that the cold temps did not do them in, the wind did. The plant structure is still solid and healthy, but the plant has severe wind burn. This causes large brown area on the leaves and center. Again, give this plant some time.”

As for sedums, just wait on those as well, said McClellan.

“They will emerge triumphant. A hard freeze can do them good. Sedums will survive freezes and layers of snow.

McClellan said anyone wondering if their cactus is going to recover needs to just wait and see.

“Do not trim off the soft tissue or limp tissue. The plant will pull nutrients from those areas. Just wait, if the plant is going to survive, it will drop those parts naturally.”

“Do not trim off the soft tissue or limp tissue. The plant will pull nutrients from those areas. Just wait, if the plant is going to survive, it will drop those parts naturally.”

Fort Worth Cactus and Succulent Society