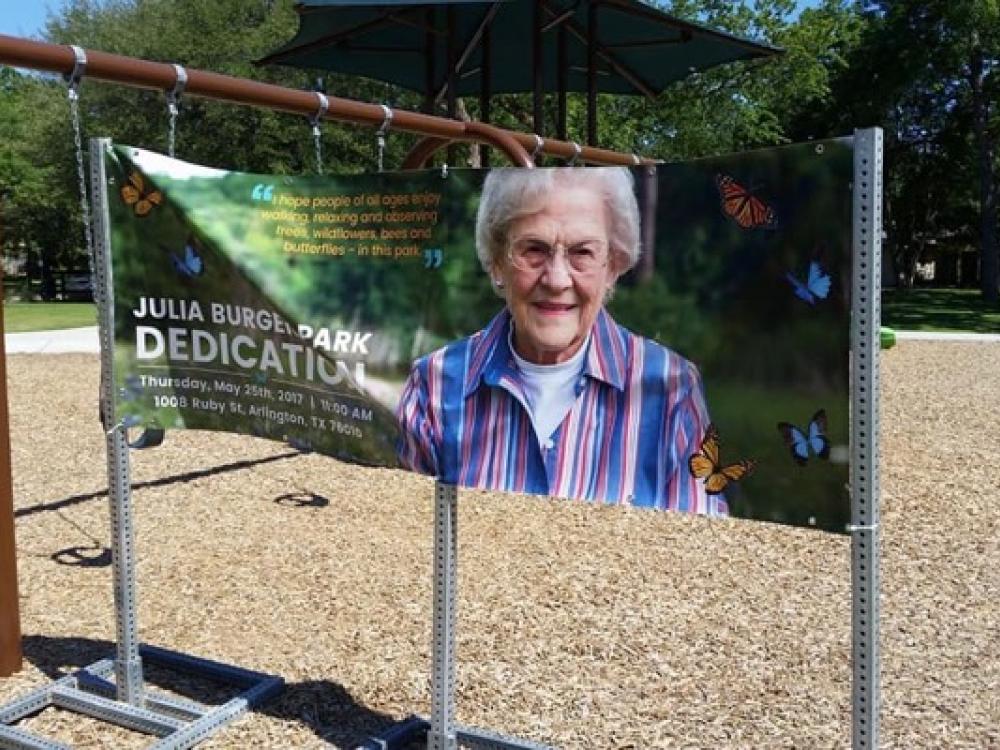 The Julia Burgen Linear Park, named for the former city council member and early environmentalist, was dedicated in Arlington in May.

In the world of ecology, sometimes moving forward means looking around.

In 1995, Arlington’s city council had a big decision to make for flood control of Johnson creek. One path was to follow the Army Corps of Engineers idea for a massive concrete ditch through the city.

The other was to take the advice of a relatively unknown, but pioneering eco-visionary citizen who suggested uprooting the hundreds of flood-prone homes and creating a series of linear parks around the creek. 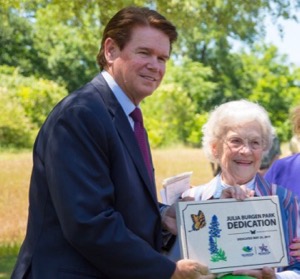 In a tight vote (5 to 4) the council decided to take Julia Burgen’s plan.

“That was a defining moment of what we wanted the city to be like,” said Burgen, who had restarted the Arlington Conservation Council just a year before the big council decision and later successfully served on the city council  for six years. She added that there were several groups, including the Friends of Johnson Creek and East Arlington Renewal, who helped fight for the linear park, along with the ACC.

But the face of the counter proposal was all Burgen.

“If Julia hadn’t had the vision to counter the proposed Army Corps of Engineers plan, Arlington’s central feature and historic core would now be a gabion and concrete-lined ditch devoid of aesthetic or ecological value,” said Jan Miller, president of the ACC. “Based on the Johnson Creek experience, the city changed its approach for future development along creeks.”

To honor Burgen for her decades of environmental activism, the city named its most recent extension of the Johnson Creek greenway the Julia Burgen Linear Park. A dedication for the park was held in May.

"Julia Burgen dramatically increased the environmental awareness of the overall community and the political community – from protections we have now for trees to expanded landscaping requirements," said Donna Darovich, Arlington Parks and Recreation board chair.

The new park is 67 acres of “recycled” land that once held more than 100 homes off Mitchell Street between Cooper and Collins in central Arlington. A covered playground, pavilion, mile-long hike and bike trail, parking lot and open grassy areas now stand where flooded houses and crumbling sidewalks stood.

As part of the Johnson Creek Corridor Plan, Arlington plans to eventually create a series of linked linear parks that stretch from Gateway Park near the Parks at Arlington Mall up to the Richard Greene Linear Park near AT&T Stadium and Globe Life Park. The Julia Burgen Park will help eventually close the gap between Vandergriff Park and Meadowbrook Park. 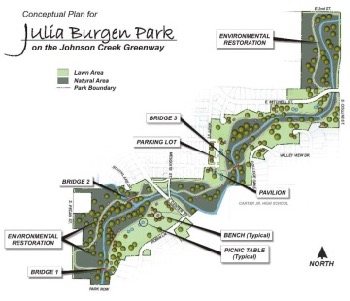 Such words from a city official are music to Burgen’s ears, but the activist always sees more work to be done for the environment.“Arlington has definitely improved [environmentally] from where it was in the 1980s when I moved here,” she said. “Environmental awareness was zilch then. But there are still some things that need improvement.”

Among them: Burgen would like to see a better tree ordinance than the one she helped create in the early 1990s after a giant oak in south Arlington called the “Witness Tree” was moved by a developer and later died. Also, recycling has not been built into the plans at UTA for the new multi-use apartments, she said.

One of Burgen’s strengths is to take on an all-encompassing view of environmental issues, Miller said.

“Being ‘green’ isn’t easy:  it can be discouraging to fight and re-fight issues over the years and a lot of budding environmentalists either have a single-issue focus or a broad focus with little depth and/or they just don’t last,” Miller said. “Julia has stuck with it to make important contributions across a wide variety of environmental causes.”

Burgen, 83, has had a long history on environmental activities, which began in Dallas in the 1970s. when she joined the Texas Committee on Natural Resources and other environmental groups there.

“I was instrumental in keeping a pecan forest in Carrollton from being a part of a floodplain clearing on that fork of the Trinity that went north from Farmers Branch and Carrollton,” she recalled.

She also worked on environmental issues regarding development around L.B. Houston Park in Dallas.

When her family moved to Arlington in the 1980s, she picked up the environmental thread again, returning to school at UT-Arlington to get a master’s degree in interdisciplinary studies with a heavy emphasis on biology and science. As part of her master’s thesis, she wrote a trail guide to what later became River Legacy Parks.

The new park is only part of a long list of accolades to Burgen. She received a national award from her college sorority, Delta Gamma, for her years of environmental activities, along with five state awards and four local award for her activism.

But Burgen may just like the park naming the most.

“It has a nice openness to it, a landscape with scattered trees, Indian blanket, bluebonnets, Queen Anne’s lace – a whole lot of wildflowers,” she said. “Then there’s the native forest, bird life, plant life – there 150 different species in the area, not counting the trees.”

Burgen likes to visit the new park and talk to families playing there.

“Several times when we have visited families have been there and I have had some nice conversations with parents and grandparents so appreciative of places for their little ones to play,” she said. “There already is a Friends of Julia Burgen Park group and I hope that we can facilitate and help manage native and wildflower plantings in the park.”

Burgen’s big idea more than 20 years ago has come to fruition, but there is still in her mind always more that can be done.

Teresa McUsic is an Arlington-based writer focused on consumer, environmental and health issues. She's written for a number of local and national publications, including the Fort Worth Star-Telegram, the Dallas Times Herald and Cure Magazine. She can be reached at tmcusic@aol.com.