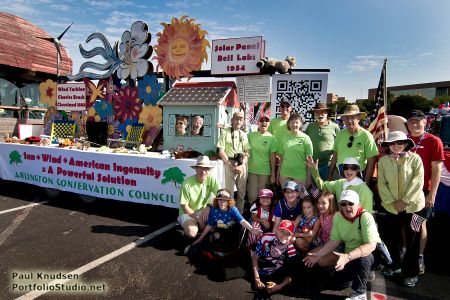 The Arlington Conservation Council shows off their solar-powered float made with recycled material for the Arlington Fourth of July Parade. Photo courtesy of Paul Knudsen.

This year, the theme of the city of Arlington’s annual Fourth of July parade was "Celebrating American Ingenuity." The Arlington environmentalists showed a little ingenuity themselves by creating the parade's first entry featuring a working solar system.

"We always try to convert the theme into something to do with sustainability," said Danny Kocurek, president of the Arlington Conservation Council, a 40-plus-year-old conservation group. 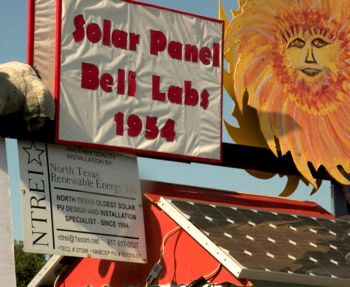 The float featured a mock home with two 75-watt solar panels, which powered their PA system. It provided amplification for a string band of 12-year-olds who performed patriotic songs from a truck bed.

In addition, a real wind turbine topped the display.

“It’s easy if you know what you’re doing,” said Kocurek, an Arlington-based emergency room doctor, regarding the technology. “It took him 30 minutes. It would take us all day to figure it out.”

All in all, it took about 20-30 hours to materialize their concept – from light bulb moment to finished product. 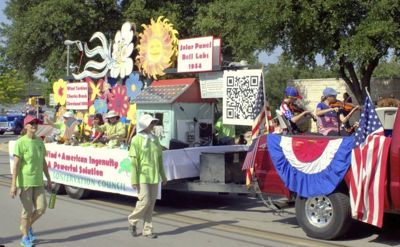 “The hardest part is coming up with the idea,” joked Kocurek. “Planning and procrastinating actually takes a lot longer than actually putting it together.”

The solar panels provided amplification for a string band.

Kocurek said the whole contraption had an earth-friendly quality to it. They didn’t buy any new material to make it. Supplies were scavenged from dumpsters, curbs and garages by intrepid ACC members. The rest was borrowed or donated.

“We haven’t had to buy anything new in several years,” said Kocurek of ACC’s projects. “We could if we wanted to. We just like the challenge.”

As for renewable energy, he says he walks the talk when it comes to solar. He hired Duncan, owner of North Texas Renewable Energy Inc., to install solar when building his home a few years ago and said he’s already enjoying the payoff.

“Most of the year, we have negative bills.”