Although the Senate voted down the Keystone XL, activists say the pipeline fight isn't over 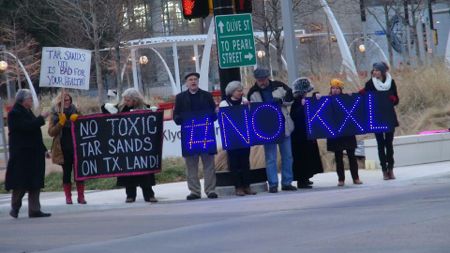 Local activists urge North Texans to let their political representatives know that the Keystone XL pipeline is part of an unsustainable future of fossil fuels. Above, protestors hold up signs at Klyde Warren Park in Dallas during rush hour in February. Courtesy of Linda Cooke.

By the time readers see this, they'll have heard that the U. S. Senate voted down a bill to authorize construction of the controversial Keystone XL tar sands pipeline. The final tally was 59-41 – just one vote short of the 60 needed to advance the legislation. With the House of Representatives approving a similar bill Friday, would a Senate “yes” vote have meant Keystone would be built?

What might this mean for North Texans? If you disapprove of the pipeline, what can you do to be heard? 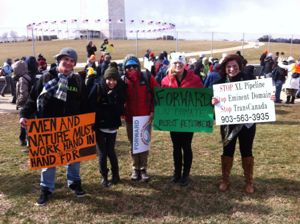 Congress doesn't have the say-so. The President, informed by EPA  and a State Department review completed in January, does. It's a power play. Bill sponsor Sen. Mary Landrieu (Dem.) gave her strategy last week, “It will go to the President’s desk… stand-alone …[for him] to have to make an important decision.”

Right, Texas activists at the 2013 DC Climate Rally. They were featured in the Dolphin Blue funded film 'Cry Heard 'Round the World.'

“I have to push back against this idea it's… either a major jobs bill for the U.S., or will somehow lower gas prices for Americans…It provides Canada the ability to pump their oil, through our land, to the Gulf, to everywhere else.”

The construction jobs for Keystone are estimated at 3,900 to 9,000. Once it’s built, it will employ only about 35, according to Michael Lindenberger, Dallas Morning News. None will be in Texas.

Rita Beving, Dallas environmentalist and previous North Texas point person on Keystone for the activist group Public Citizen, believes Texans need to be as vocal as congressional yay-sayers on this project. 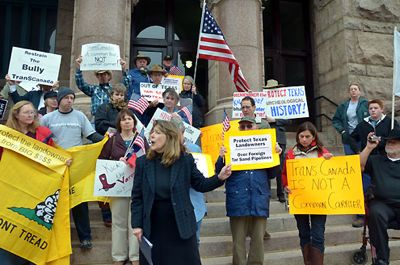 Left, Rita Beving addresses the crowd in Paris, Texas in February 2012, where a judge heard the case of Julia Trigg Crawford, an East Texas  landowner who obtained a restraining order against pipeline owner TransCanada. Courtesy of NTXE-News.com.

"We view this pipeline as all risk and no reward. We in Texas who have worked with landowners and know the reality of what pipelines have put at risk – we need to be putting out the word.”

Beving cites numerous construction flaws on the Texas leg of the pipeline, which opened in January – pumping crude oil, not the heavy, viscous tar it’s intended for. Warning letters in September 2013 from PHSA, the agency that certifies pipeline construction, stated Keystone’s builders used unqualified welders, violated safety standards by resting pipe on rock that can wear through it, and that 48 percent of welds tested were bad.

"Call your representatives. Call Democrat swing votes, even if they're not in your district. We need to be putting out the word on popular blogs, like Huffington Post and Politico,” says Beving.

The fundamental issue with high carbon-content tar sands for fuel is, they accelerate the planet‘s rise in atmospheric C02  to levels that world scientists agree are untenable for life as we know it. According to past NASA scientists James Hansen, the global science community’s Intergovernmental Panel on Climate Change and carbon-level tracking, the fossil fuel already in reserve exceeds the amount that can be burned without increasing average world temperatures more than 2 degrees Centigrade.The catastrophic effects on weather, desertification, ocean rise and disruption of food supplies, scientists say, are beyond what we can adapt to. High-carbon tar kickstarts this. 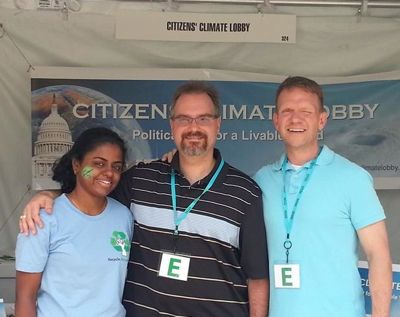 "We don't even talk about environmental effects,” says Ricky Bradley, Dallas-based regional coordinator for Citizens' Climate Lobby, an education and advocacy group that engages Congress members nationwide. Their strategy is a market-based approach to energy.

"That's a principle everyone can embrace," Bradley notes. "If all fuel sources were evaluated for their true costs, carbon-based fuels like tar sands would be seen to make no economic sense…We're in a system that socializes the costs of developing fossil fuels. Oil companies are subsidized to develop fossil fuels, and let the public pay the environmental costs.

“The worst thing about massive projects like Keystone, that take 30 years to repay the investment, is they lock us into a non-sustainable situation. They come at the expense of developing renewables.”

Bradley’s experience shows, calling the White House, or writing a personal letter to representatives, are the most effective weigh-in on issues.

"The most important thing we can do is communicate with them.”