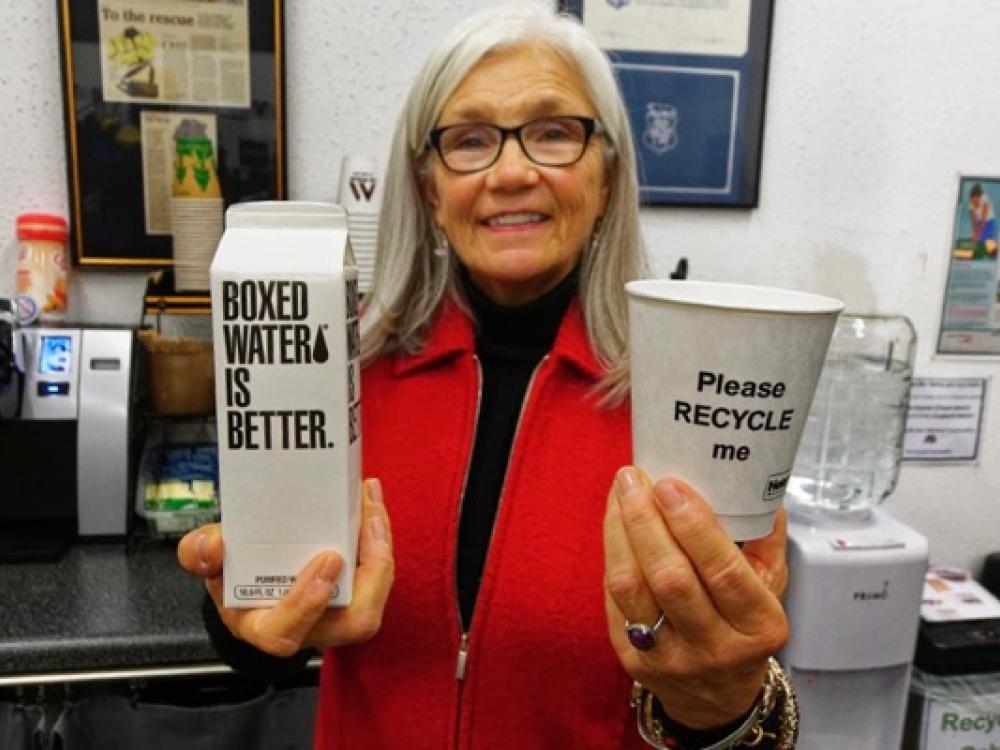 M-Pak owner Debbie Cooley poses in front of the complimentary coffee bar at her storefront, which includes compostable coffee cups and water in paper cartons. Photos by J.G. Domke.

The only thing green about some of her clients is their camouflage but a local business owner still aims to steer them in an eco-friendly direction.

“I’ve always wanted to protect the environment,” says Debbie Cooley, founder and CEO of M-Pak in Aledo, west of Fort Worth. 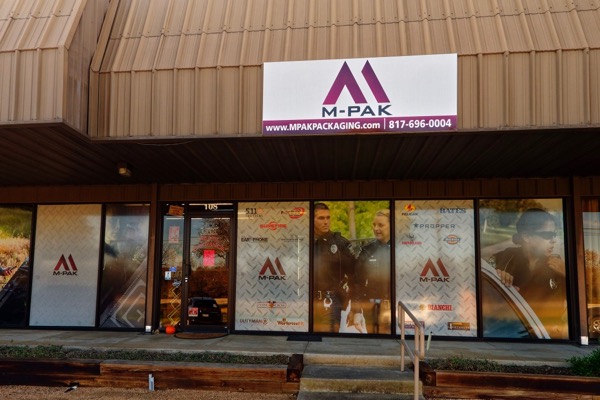 M-Pak in Aledo caters to military, police and fire departments.

She distributes products used by the military, police and fire departments such as uniforms, gun cases and holsters. About 85 percent of M-Pak's business is from the federal government. Customers include all branches of the U.S. military, including the FBI; Departments of the Interior, Agriculture, Commerce and Homeland Security and the Federal Emergency Management Agency, according to the Fort Worth Business Press.

M-Pak must bid on filling the order to the letter and be able to ship it worldwide. One way she’s found to align her business with her green values has been to reduce the shipping waste.

“It’s very competitive,” she says of the industry and boasts in the company brochure that they are “one of the most price-competitive companies in the industry.”

Although winning a government or corporate bid is almost always based on whoever is cheapest, Cooley promotes a green shipping option to customers and schools them on products that are “100 percent recyclable,” like the coolers or the environmentally friendly weatherproof notepads in her online catalog. She hopes to encourages customers to “ask us about our totally green corrugated box that requires zero void fill.” 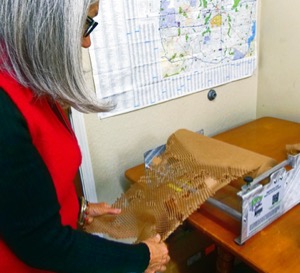 She offers to fill the empty space around the contents with modified paper padding rather than a cheaper non-recyclable polypropylene “popcorn.”

If the client decides to pay a bit more she says, they then must specify in the contract to only accept “bio-degradable cooler” and green packing material.

In the office bordering Tarrant and Parker counties, there are signs of her green bent. She stocks “bottled” water packaged in a paper cartons, not plastic. 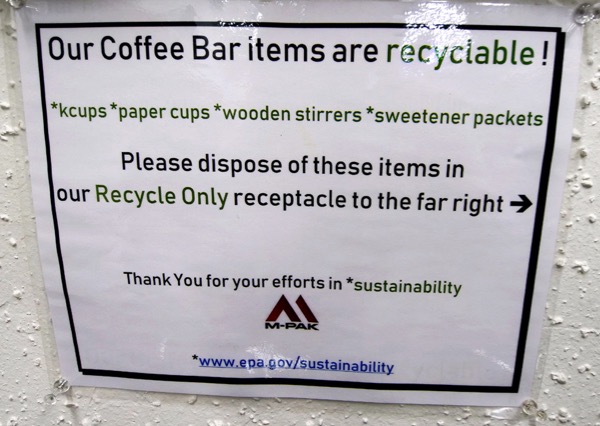 In the store next to the corporate office, a free coffee bar for visitors displays a sign: “Our coffee bar items are recyclable!” listing compostable cups, wooden stirrers and paper sweetener packets saying at the bottom “thank you for your efforts in sustainability.” For those who question the statement, Cooley provides a link to the EPA.

“We need to recognize that industry has a big influence on the planet, and that’s why it works to mitigate the environmental impact of its products,” Cooley told Army magazine in 2014.

Although there has been a five-fold increase in recycling across America since 1990, plastic production in 2017 according to the EPA grew over thirteen percent. Dallas recycles just 22 percent compared to 34 percent nationwide.

Seeing how the garbage collector to the building didn’t offer recycling, Cooley installed at her own expense a recycling bin behind the complex and encourages all the tenants to use it.

Dedicated and determined to save our environment, Cooley has donated recycle bins to various Little League parks.

As a member of Fort Worth chapter’s peer-to-peer networking of business owners, Entrepreneurs Organization, she traveled to New York last summer to be signatory on the United Nations Global Compact’s Sustainable Development Goals.

The UN Global Compact works with companies around the world and is “the largest corporate sustainability initiative in the world.” Driving business awareness and action to meet SGD goals aimed at labor force, human rights and the environment.

She pledged that businesses should support a precautionary approach to environmental challenges by undertaking initiatives to promote greater environmental responsibility and encourage the development and diffusion of environmentally friendly technology.

Cooley says she also finds going to a Goodwill stores a “delight” and enjoys finding a “treasure,” which she can reuse or give it to someone who will put it to a good use.

She laughs as she tells how her daughter, Anna Boulware, the vice-president of sales at M-Pak, thinks her mom is just a “hoarder.”