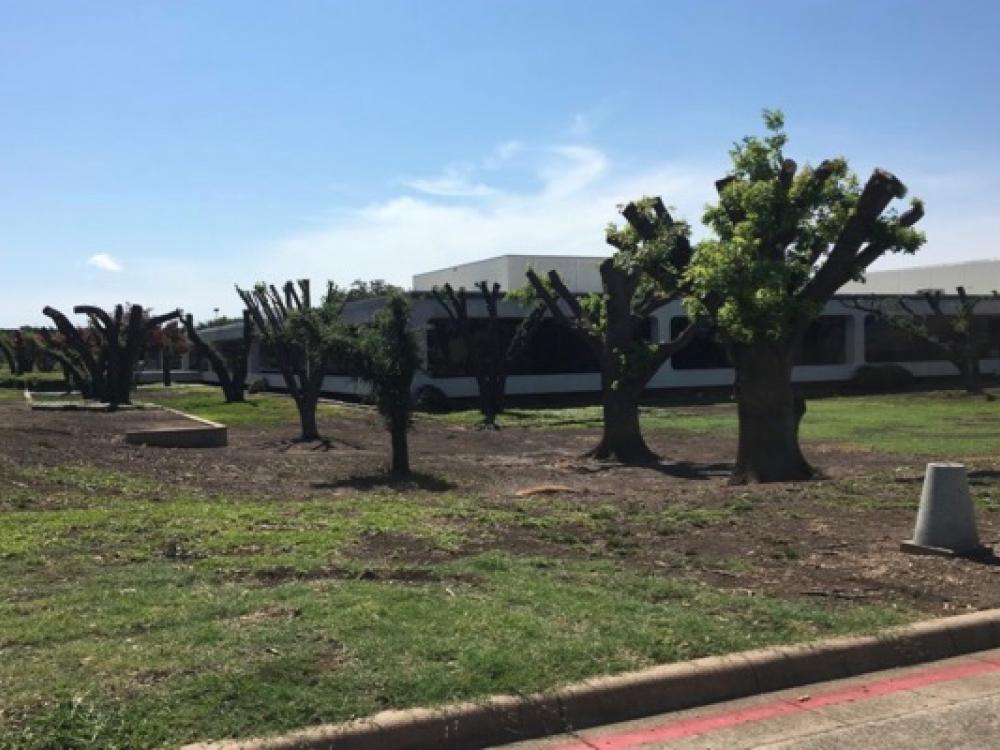 In June, Dallas, more than 30 live oaks were hacked by property owners along Forest Lane in Northwest Dallas. This action currently violates Dallas’ tree ordinance, which could be put in jeopardy if Governor Abbott gets his way. Photo by Rita Beving.

This week marks the start of the Special Session at the Texas Legislature. Governor Abbott has put forward a wish list of twenty agenda items including a bill that would prevent cities from regulating what property owners can do with trees on private land.

Already during the 85th legislative session, bills attempted to take an axe to local control and city tree ordinances, including one by Representative Workman who devised a bill to allow trees to be cut down if the owner felt a tree(s) posed a “fire risk.” Other bills such as one by Senator Kolkhorst, would have given developers more latitude in a city that imposes a tree mitigation fee by allowing developers to apply for a credit if they tree plant to offset the mitigation fee. Both bills failed to become law, though Kolkhorst’s bill made it all the way to the finish line, only to be vetoed in the end by Governor Abbott.

Perhaps the Governor’s veto pen was triggered with an aspiration to deal trees a more fatal blow with a sweeping bill in the Special Session to take total local control away on all city tree ordinances across the state. Abbott has named Senator Bob Hall of Rockwall, who unsuccessfully tried to take away cities ability to have bag bans, as his champion to carry the tree ordinance ban in the Senate. He has named Representative Workman, the author of the failed tree fire risk bill, and whose roots (pardon the pun) are in the construction business, to head up the efforts in the House.

There are more than 50 cities in Texas with ordinances that protect trees on private property that would be affected if this proposed legislation passed.

According to the U.S. Department of Agriculture, one healthy tree next to one’s home can provide the cooling effect of ten air conditioners operating 20 hours a day. According to the USDA Forest Service, trees properly placed around a building can reduce air conditioning costs by as much as 30 percent and can save between 20 to 50 percent in energy used in heating.

Trees help our urban climate in many ways. They keep cities cooler and reduce air pollution, as less fossil fuel is needed to generate electricity to air condition buildings. Trees also help clean the air by taking in carbon dioxide and releasing oxygen. Additionally, trees contribute to improving the health of our local communities by collecting and hold dust pollution.

So what’s not to like about trees, especially beautiful mature trees?

Well, critics speculate that Governor Abbott wants this bill partially out a personal vendetta against the city of Austin which told him that he couldn’t chop down a pecan tree in his backyard without replacing it or paying into the reforestation fund. It’s also been said that the Governor thinks protecting trees is a “socialist” view and that it “violates private property rights.”

Tell Governor Abbott he needs to see the forest through the trees and realize the “green” in “green.” Abbott shouldn’t use a personal incident to destroy the value that the rest of us see and realize on our properties by taking away the power of local municipalities to pass and execute their tree ordinances.

[picture] Recently in Dallas, two developers made the mistake of butchering trees on two different sites causing an uproar in both North (pictured) and South Dallas.  This action currently violates Dallas’ tree ordinance which could be put in jeopardy if Governor Abbott gets his way.

Urge your Texas Legislator to block any attempts during the special session to eliminate cities’ abilities to protect old growth trees to cool our homes and in turn, our cities.

Texas Senators will hear legislation stripping local governments of their rights to protect trees. If this bill – SB 14, the Senate companion of HB 70 – is passed into law it would mean that big developers could cut down as many trees as they want, wherever they want, regardless of the impacts on neighboring landowners or the environment. More than 110 Texas cities and towns have passed laws protecting their trees – all of them will be erased. SB14 has been assigned to the Business and Commerce Committee and is scheduled for public hearing this Saturday, July 22, at 9 a.m.  Please call the committee members prior to the hearing to voice your opposition. Committee members and contact numbers are listed here:

Here are the addresses for a group email to Business & Commerce: