Senate Bill 14 and House Bill 70, ban cities, counties and even HOA from restricting property owners’ removal of trees or other vegetation.

Bills to pre-empt local ordinances protecting trees throughout Texas are being pushed through the legislature right now, unless public opposition stops them. More than 100 cities in Texas that already have tree ordinances would be affected.

Several bills filed at Gov. Greg Abbott’s urging would limit local governments in working with developers to retain community tree canopies. The first two that raise the hatchet, Senate Bill 14 and House Bill 70, ban cities, counties and even HOA from restricting in any way property owners’ removal of “trees or other vegetation.”

Senate Bill 14 was fast-tracked to a committee hearing and passed Saturday. It’s expected to be voted on the Senate floor this week.

Abbott has publicly decried local tree protections as affronts to private property rights, most recently calling them “socialist” to a packed house near the Capitol June 17, reported Texas Standard. In fact, almost no local ordinances limit homeowners’ rights, Dallas urban forester Matt Grubisich pointed out. Scores of groups, officials, foresters and arborists oppose the anti-ordinance effort as misguidedly disregarding the measurable environmental, economic and health benefits that trees provide in favor of scorched-earth development that’s unlivable. Like the tree equivalent of eating the goose that laid the golden egg?

Political ideology aside, Abbott has a clear conflict of interest on this issue, the nonprofit Texans for Public Justice reported July 17. By Texas Election Commission reports, he has received $10.7 million in campaign contributions from Texas builder and developer lobbies since 2013.

It’s a battle over local control and the tree protections in place in 110 Texas cities, by a city of Austin count. Defend Texas Trees, a 21-member coalition including cities, Texas chapters of Physicians for Social Responsibility and League of Women Voters, landscape architecture and arborist associations and 14 environmental groups, is rallying opposition.

“The Governor keeps throwing private property rights out there…when in actuality, no ordinance that I know of, and none in the DFW area, restricts anyone from cutting down trees on personal property," said Grubisich, operations chief for Texas Trees Foundation. The veteran Dallas nonprofit produces high tech analyses of North Texas urban forests and visionary collaborative projects to protect them.

“The Governor keeps throwing private property rights out there…when in actuality, no ordinance that I know of, and none in the DFW area, restricts anyone from cutting down trees on personal property."

All have a minimum two-acre exemption allowing you to remove any tree on your personal property, he said.

“The issue comes when you want to sell that land and change the zoning to develop the property. Tree conservation ordinances take effect in an effort to protect the ecological balance between the gray and green infrastructure.”

It’s the "green infrastructure” that makes the gray, manmade infrastructure of cities and towns livable and more lasting, Grubisich and others pointed out. 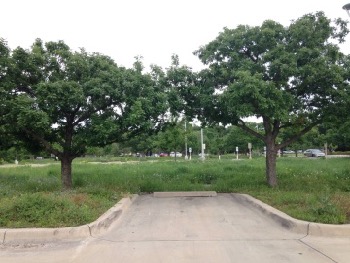 Mexican plum trees shade a parking space at Botanical Research Institute of Texas in Fort Worth. Photo by Karl Thibodeaux.

“Trees affect the environment, cool your property and the neighbors’, reduce energy costs, clean the air,” said David Foster, Texas director of Clean Water Fund, en route to the legislature. “They take up and hold water, release it into the air and increase rainfall. They reduce stormwater runoff, hold soil and mitigate erosion, which reduces flooding. They capture carbon,” combating heat-creating atmospheric CO2.

“I don’t know if the authors of those bills understand what they’ve done.”

In 2014, Texas Trees Foundation computed the dollar values of just such benefits from trees in Dallas alone, based on research from eight contributing organizations. The annual value for stormwater savings, energy savings, air pollution removal and carbon removal by Dallas’ almost 15 million trees totaled $36.1 billion. These include direct costs to homeowners and tax-funded ones.

A TTF map identifies tree sites that are targeted for development, based on planned DART rail stations, city initiatives, neighborhood goals. Thirty-seven percent of the tree canopy is potentially in the path of development. That’s equivalent to the entire Trinity River Forest.

Grubisich sees uncontrolled tree removal as not only damaging to the public’s well-being and finances, but self-defeating to life in the city and development itself. It’s an insane calculus.

“Developers don’t bear the cost of tree preservation, they pass it on…eventually to the cost of the property. Vice versa, if we allow them to go in and cut down all the trees and pave everything over, we’re going to have more stormwater, health related issues, higher temperatures, more visits to Parkland. We are going to have to put in more infrastructure…those costs are passed on to the city, not to mention the long term consequences to healthcare.

“Either way the public is going to bite the bullet, so we need to make sure that when developers come in, buy up properties and stand to make a lot of money, they can’t do that at the risk of the population as a whole. That’s not sustainable.

“There are a lot of developers out there who understand that they need to be doing sustainable development, because if people won’t be here to purchase their goods or buy their homes, they won’t make any money.”

Developers, the Dallas Builders Association and tree professionals including Grubisich are working together now to finalize Dallas’ new tree ordinance.

“We understand that we need growing development to support a rising population…but we can’t do that at the risk of our health, of our long-term sustainability, of our safety. That’s what we risk when we do blatant, unmanaged development.”

Organizations united as Defend Texas Trees are on email and phone campaigns to counter that scenario, potentially deploying their thousands of members to oppose SB 14 and HB 70.

“We understand that we need growing development to support a rising population…but we can’t do that at the risk of our health, of our long-term sustainability, of our safety. That’s what we risk when we do blatant, unmanaged development.”

“Based on what I have heard, it [SB 14] will be reported out from the Senate committee as is, and we are totally dependent on the House to kill it,” former Rep. Lon Burnam, director of Tarrant Coalition for Environmental Awareness, said on Monday.

Defend Texas Trees, TreeAct and other groups encourage residents who oppose the anti-ordinance bills to engage House Urban Affairs Committee members, regardless of their home district, via their websites.