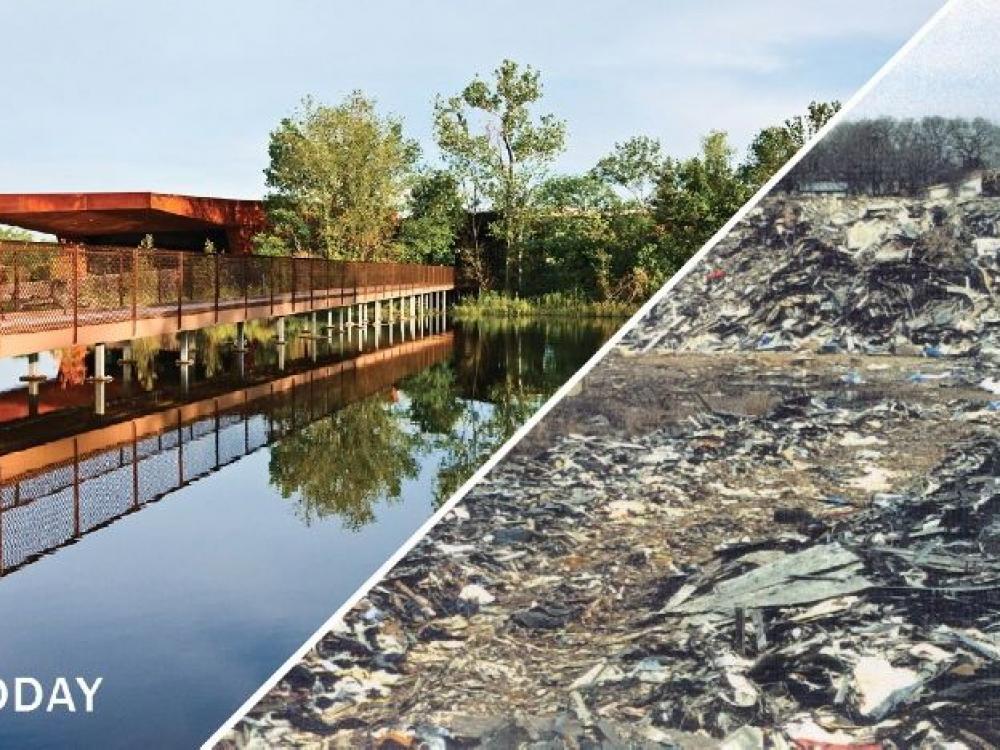 The Trinity River Audubon Center today with a photo of the site from 1997. Courtesy of bcWORKSHOP.

WATCH THE 'OUT OF DEEPWOOD' TRAILER.

I remember reading about how the Trinity River Audubon Center in Dallas was built on the site of a former landfill. However, it wasn’t until I saw the documentary Out of Deepwood that I appreciated that history.

On Jan. 25, you can hear the story yourself when Earth Day Texas partners with TEDxSMU and bcWORKSHOP to show the locally produced film at the Angelika in Dallas at 6:30 p.m. A reception with cash bar starts at 5:30 p.m. Tickets are $6.27 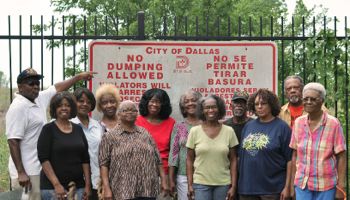 Turns out, on the site where the nature center now sits, the largest illegal landfill in the state of Texas once operated. Located in a predominantly black neighborhood in south Dallas, the 85-acre dump not only leaked toxic chemicals, it caught on fire twice and burned for several months basking the neighborhood in its smog. Twenty five years went by after residents first complained about it. After authorities appeared to be purposely turning a blind eye, the neighborhood enlisted the help of a law firm to sue the city of Dallas. And in 1999, Judge Barefoot Sanders found the city and landowners liable under federal law and ordered the cleanup of the site.

Deepwood neighbors today, in front of the “No Dumping Allowed” sign and fence around the former entrance to the Deepwood Dump. Photo courtesy of bcWORKSHOP.

The 2014 documentary by Craig Weflen of bcWORKSHOP beautifully and succinctly tells the environmental justice tale with interviews of the neighbors, attorneys, Sanders’ widow and others.

Following the screening on Jan. 25, some of these players will be on hand to discuss the film and answer questions. Guests include Shirley Davidson, a neighbor to the Deepwood Dump; Laura Beshara, one of the attorneys that worked on the lawsuit, T Hanson, former director of operations at the Trinity River Audubon Center and Weflen, the filmmaker.

While Weflen’s film sheds light on how a group of people with less political power were exploited for years, it is ultimately a story of hope.

The landfill was shut down. And because the property owner didn’t have the money to clean up the site, the city took it over and made it a part of the Trinity River Project. The most toxic refuse was removed with the remainder consolidated and moved to the perimeter. And the nature center, now known as the Trinity River Audubon Center, opened its state-of-the-art Gold LEED facility in 2008.

Last year, TRAC drew 86,000 visitors. Of those 20,000 were school children from around the Metroplex.

Someone pointed out to me, there is a local precedent of trash sites being turned into treasure. In Fort Worth, an abandoned gravel pit used for decades as a dump by a calvary unit, was transformed into the delightfully landscaped 7.5-acre Japanese Garden.

Hanson, who was TRAC operations director from 2008 to 2015, believes that the Audubon Center is also a local jewel. However, while the wildlife has come back, she said it still remains undiscovered by many. Partly because it is tucked away down a long entrance road in an area that still has few community amenities.

“I would like to think that the Audubon Center has had an impact on the neighborhood,” she said. “I think there’s still more work to be done to engage the surrounding community.”

'Out of Deepwood' Screening

Where: Angelika in Dallas

About: Screening at 6:30 p.m. will be followed by a panel discussion with Q&A.

WATCH THE 'OUT OF DEEPWOOD' TRAILER.